The purpose of a float switch is to open or close a circuit as the level of a liquid rises or falls. Most float switches are “normally closed,” meaning the two wires coming from the top of the switch complete a circuit when the float is at its low point, resting on its bottom clip (for example, when a tank is dry).

To complete a circuit, float switches utilize a magnetic reed switch, which consists of two contacts sealed in a glass tube. When a magnet comes close to the two contacts, they become attracted to each other and touch, allowing current to pass through. When the magnet moves away, the contacts demagnetize and separate (breaking the circuit), as shown below. 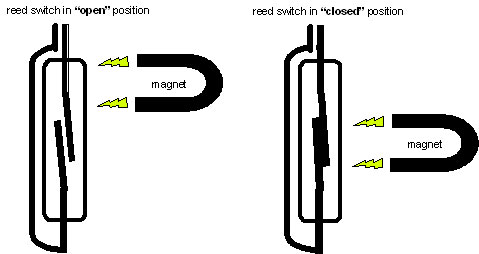 In a float switch, the magnetic reed switch is hermetically sealed in a stem, most often made from plastic or stainless steel. The float encases a sealed magnet, which moves up and down the length of the stem as a fluid level rises and falls. As the magnet passes by the contacts in the encased reed switch, they touch and complete a circuit between the two lead wires, as shown in the cutaway below. 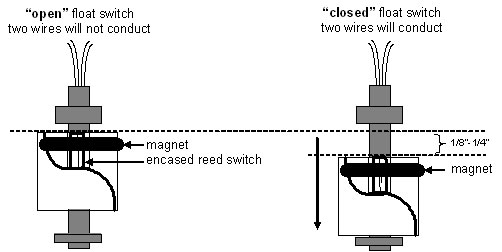 Properly used, float switches can deliver millions of on/off cycles, for years of dependable operation. Failures are normally due to overloading, frequently caused by spiking voltage. Before purchasing a float switch, read our page on Curing Spiking Voltage with a Relay.